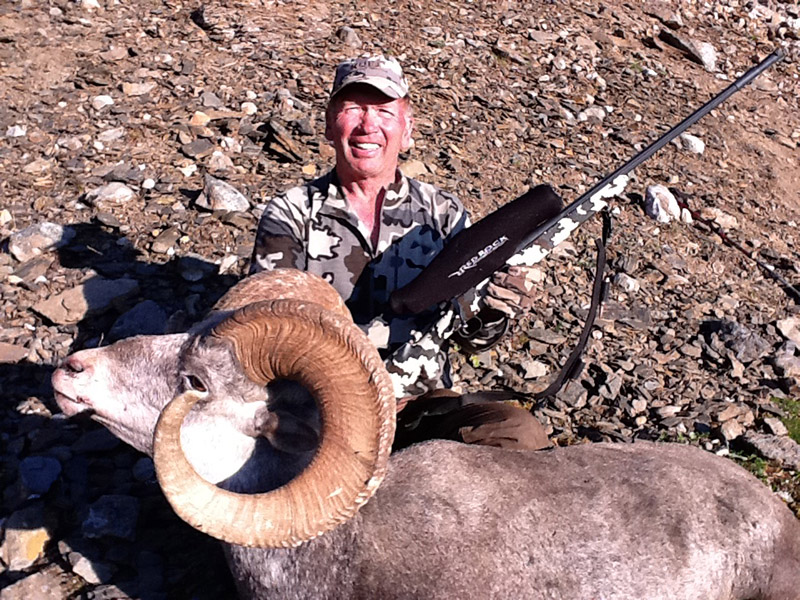 “I want to thank the guys at Red Rock Precision for making me such a lightweight, accurate sheep gun! This is 6.5×284 has plenty of knockdown power and is so easy to carry. On the 7th day of my desert sheep hunt on Carmen Island, I took a beautiful ram at 400 yards on a 45-degree angle downhill. My stone sheep was taken in British Columbia with Gundahoo River Outfitters and was a closer shot, but at a steep angle – killed with just one shot. I will be using this rifle in Mexico on an upcoming mule deer hunt. Thanks again for making the perfect sheep and deer gun!”

“I want to share my experience on a hunt in the Northwest Territories, hunting Dall sheep and mountain goat. My Red Rock Precision gun worked exactly as they said it would in the conditions it was set up for. From the sight in at base camp to the shots taken in the field, everything came together.

My ram was taken at 198 yards. The shot was downhill at a fairly steep angle. I used the top of a tall backpack standing upright as a rest and had to rise up to be able to even see down the slope. The first shot felt good, hit high in the shoulder area and angled down, but the ram did not have much of a reaction. The guide told me to shoot again, and as I was pulling the trigger the second time, the ram fell over from the first shot. He was aged at approximately 10 years old.

The goat was first spotted at about 800 yards in a big, bowl type valley. He was walking uphill from left to right, angling slightly away from us, and then bedded, quartering right uphill. We closed the distance along a steep and rugged side hill, but could get no closer than 674 yards, without exposing ourselves in the open. So, that was the shot, 674 yards, uphill angle, quartering slightly away right, bedded animal, light wind blowing from our left to right, prone position. The guide asked if I could make that shot, and if I had any doubts, not to risk it. We discussed some of the variables to the shot and the best place to aim. It was decided I should aim at the point of the knee which would angle the bullet up into the vitals. I have to admit, I had some uncertainty. I settled in and adjusted my backpack rest and took two dry fires. Everything felt good. I took the shot and hit in the exact spot I was aiming at. The bullet angled up and forward and hit his spine. He slumped over and the started rolling down the steep hillside. He rolled about 250 yards downhill and out of sight. Luckily, the fall did not break his horns, but did tear and cut his hide as seen in the photos. They said he was a good goat for the area and aged between 10-11 years old.

I have other rifles that are good rifles, but for that kind of shot, it would not have been possible. The design, build, set up, ammo/bullet/load development, and accuracy of the Red Rock Precision rifle along with the instruction at their facility made it possible. The light weight of the gun also made it easy to carry as well.” 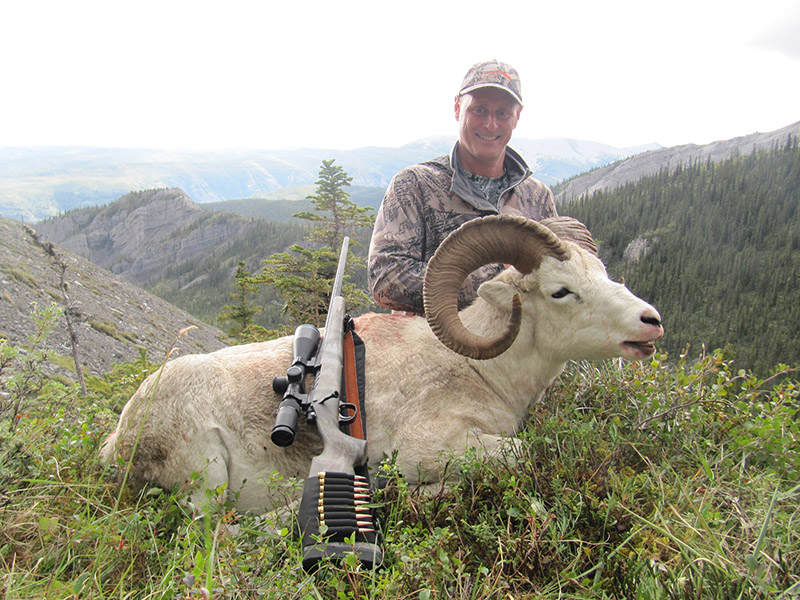 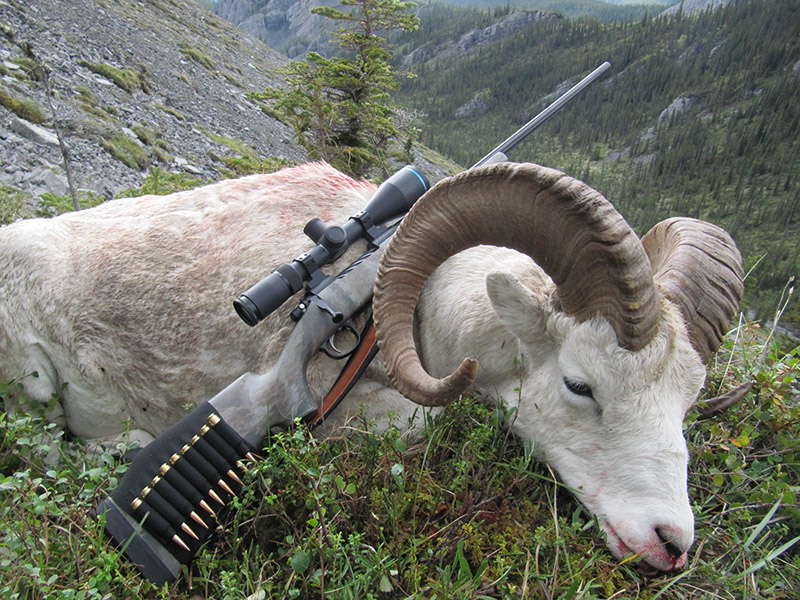 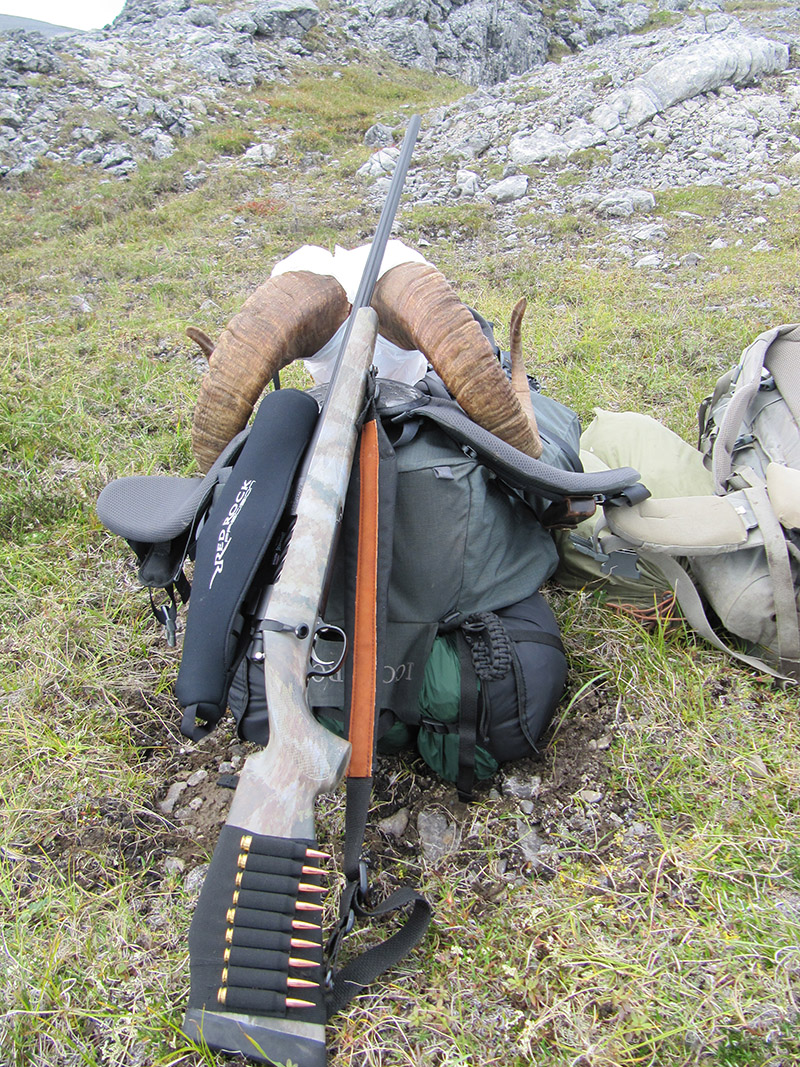 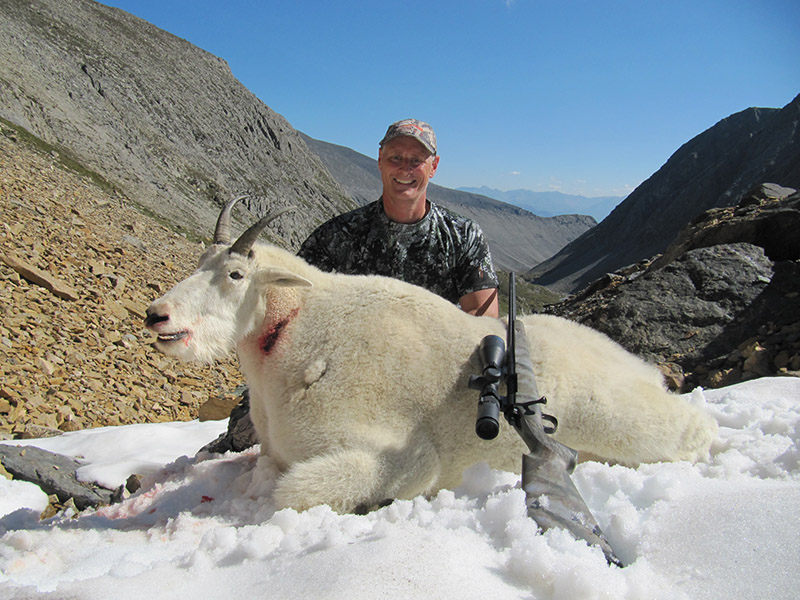 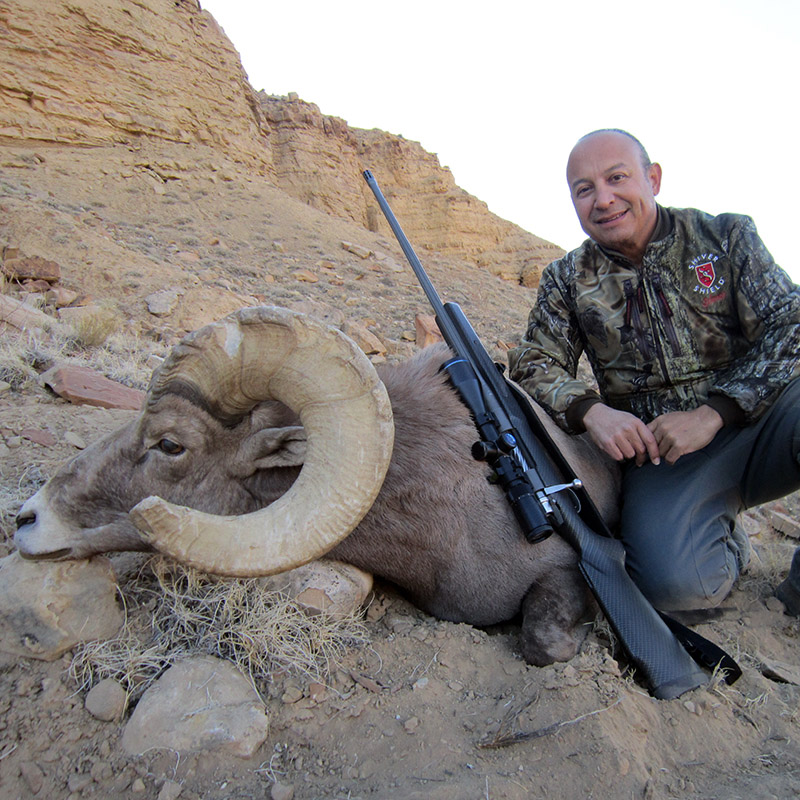 “I have hunted all around the world and shot many guns. I still remember the moment I held a Red Rock Precision rifle. I knew it was perfection. I instantly felt the balance, the ergonomic fit and just enough weight for steadiness, but quick to aim. The moment of truth came with my first five shots. They made a tight group at 800 yards, the next three shots were dead on at 1000 yards. The rest is history. Since then, I have made long-range single-shot kills including elk, mule deer, Rocky Mountain sheep, and my best yet on an Arizona Desert Bighorn sheep scoring a net B&C 185-1/8 inches. For long-range shooting, the American-made Red Rock Precision is my only choice.“

“I recently returned from my trip to New Zealand and wanted to tell you how awesome the Mountain Rifle chambered in 7mm Rem. Mag. performed. When I arrived at the outfitter’s lodge, they wanted to know what caliber and bullet weight and, more import, what bullet brand I would be hunting with. After going through the list of equipment and specs, they seemed concerned about the Berger bullet and how it would perform on the Russa and Sambar, and they assured me the guide would be there for backup to finish the job. I took 12 large game animals with my Red Rock Precision rifle and the 168-grain Berger bullet. I have video footage showing not one animal went further than 10 yards with 9 out of 12 falling in their tracks. All shots were from 153 to 661 yards. Let’s just say there are now a few more believers that would like to shoot that combination, and the guide asked that I leave him the rifle as a tip. Not a chance! With over 300 big game animals taken with several different calibers and rifles, I’ve never had a system that performed like the Ultralite Mountain Rifle.” 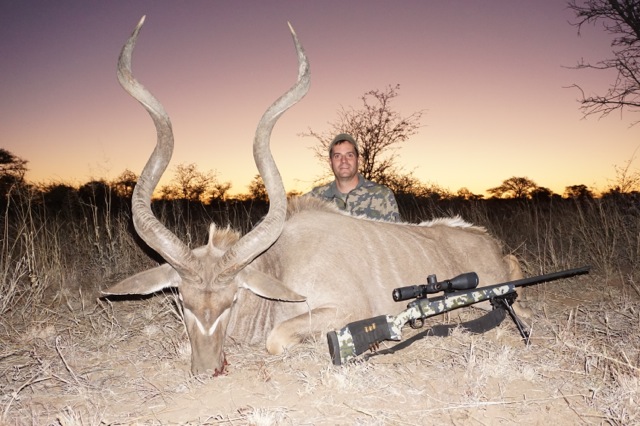 “I just returned from South Africa where I took six trophy animals with my 28 Nosler that you built. I love that rifle! All of the animals dropped in their tracks except the kudu, which made it 40 yards before expiring. After the hunt, we spent time on their 1,000-yard range where everyone was very impressed with the gun. Thanks again for an unbelievable product!”

“I walked into Red Rock unannounced on a Monday morning prior to a mule deer hunt that started that afternoon. Truthfully, I wasn’t looking to purchase a rifle. I just wanted to meet and talk with the guys (Curt and Todd) I had heard so much about. My longtime friend and guide, Perry Hansen, has been talking about his Red Rock rifle for years. Another friend, who was traveling with me, had also recently purchased one of their rifles and hasn’t stopped talking about it since he’s received it. An hour later, I walked out of their shop with a “loaner” .30 Nosler, 40 rounds of ammunition (which were hand loaded for me while I waited), and ballistic tables based on recently gathered data for this specific rifle. We went directly to the range and verified it was sighted in. All 4 of us shot quarter-sized 3 shot groups in a 15 minute time span (cold bore included). After leaving we headed out to hunt. The following morning, we spotted a buck, ranged him, dialed the turret, and I took a 528-yard shot and dropped the deer. I have since placed an order for a new Red Rock rifle and another friend along on the trip will be placing an order shortly. The quality, attention to detail, and service offered by Red Rock Precision are unmatched. Get one (or more), and sell the rest of your “custom” guns.” 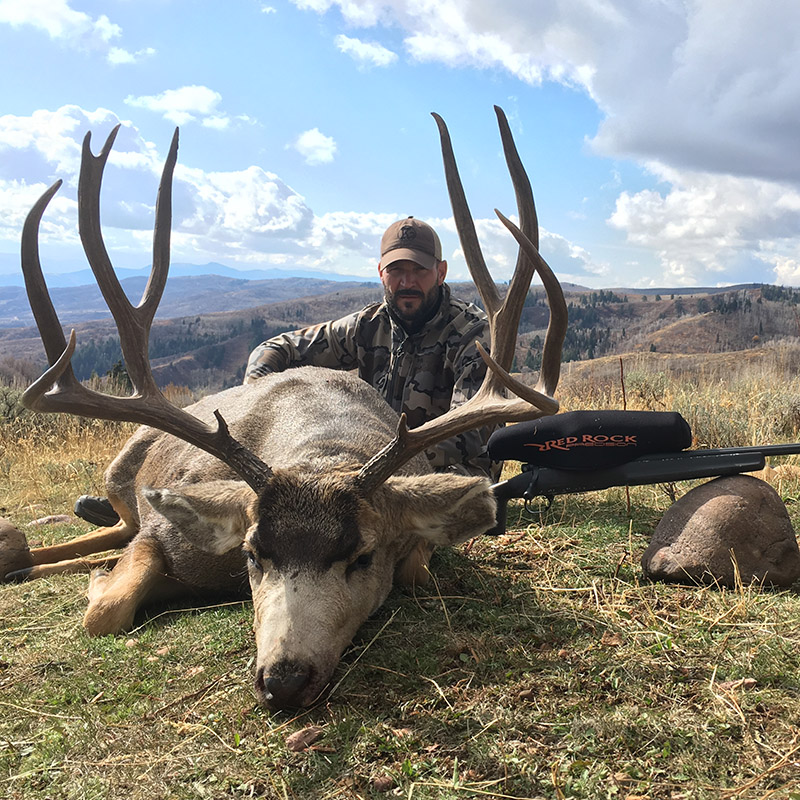 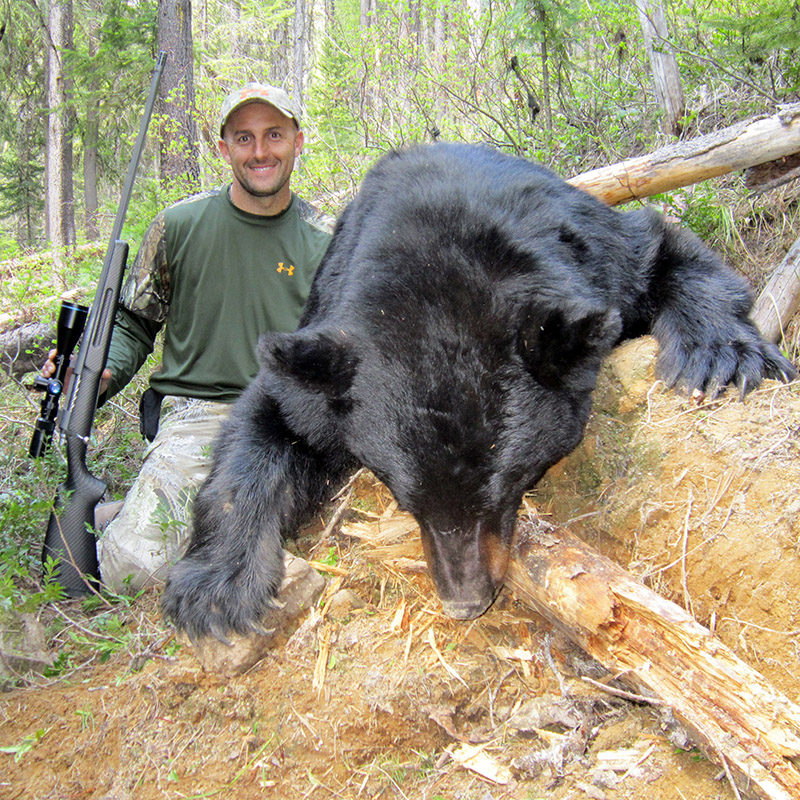 Find Adam at Epic Outdoors and find Adam and Aaron at Bronson Outfitting.“

“A 1000-yard hunting rifle? After an injury that kept me from bow hunting, I started researching long range hunting rifles. Unfortunately for me I didn’t do enough research and ended up having a rifle built for me by a local guy. After a really frustrating year of packing a rifle that wasn’t very accurate and weighed in at over 12 pounds, I started over. This time I spent a lot of time, and spoke to several custom long-range rifle builders, and as many long-range hunters as I could find. I knew that I wanted a rifle under 10 pounds (scoped) and I also wanted a rifle that was truly a 1000-yard performer.

As my list of prospects shrunk, I started digging a bit deeper into the companies and the people who owned them. Red rock Precision kept rising to the top, and after having had several conversations with Todd Sholly, I felt confident that I would truly receive the rifle I was after.

In my experience, it is not often that you actually receive a product that exceeds your expectations, but I was absolutely blown away when my RRP P2PX 7mm Rem Mag was delivered. The quality and workmanship is unmatched, and the gun fits me like a glove. The truth was that I was still a bit nervous on the way to the range, but that only last for the first three shots. Its accuracy is something that truly doesn’t seem possible with a hunting rifle, and still continues to amaze me every time I shoot it.

So now I truly own a 1000-yard hunting rifle (maybe a 1200-yard hunting rifle), but I have no real intentions of shooting an animal at 1000 yards. In fact I hope I never have to shoot over 800 yards, but I love knowing I have a weapon that will deliver the round if it’s required. To date I have shot seven deer with my rifle, and the furthest shot was 446 yards, and I have hit within an inch of my aiming point every single time. I cannot begin to tell you what that has done for my confidence, but if the time comes for that 1000-yard shot, I know the rifle will deliver.

In fact, I am so happy with my RRP P2PX I have recently ordered the new P2PXT Ultralite Sheep Rifle in 6.5 x 284, and I already know that Red Rock Precision is going to once again exceed my expectations, and I can’t wait to get my hands on it“ 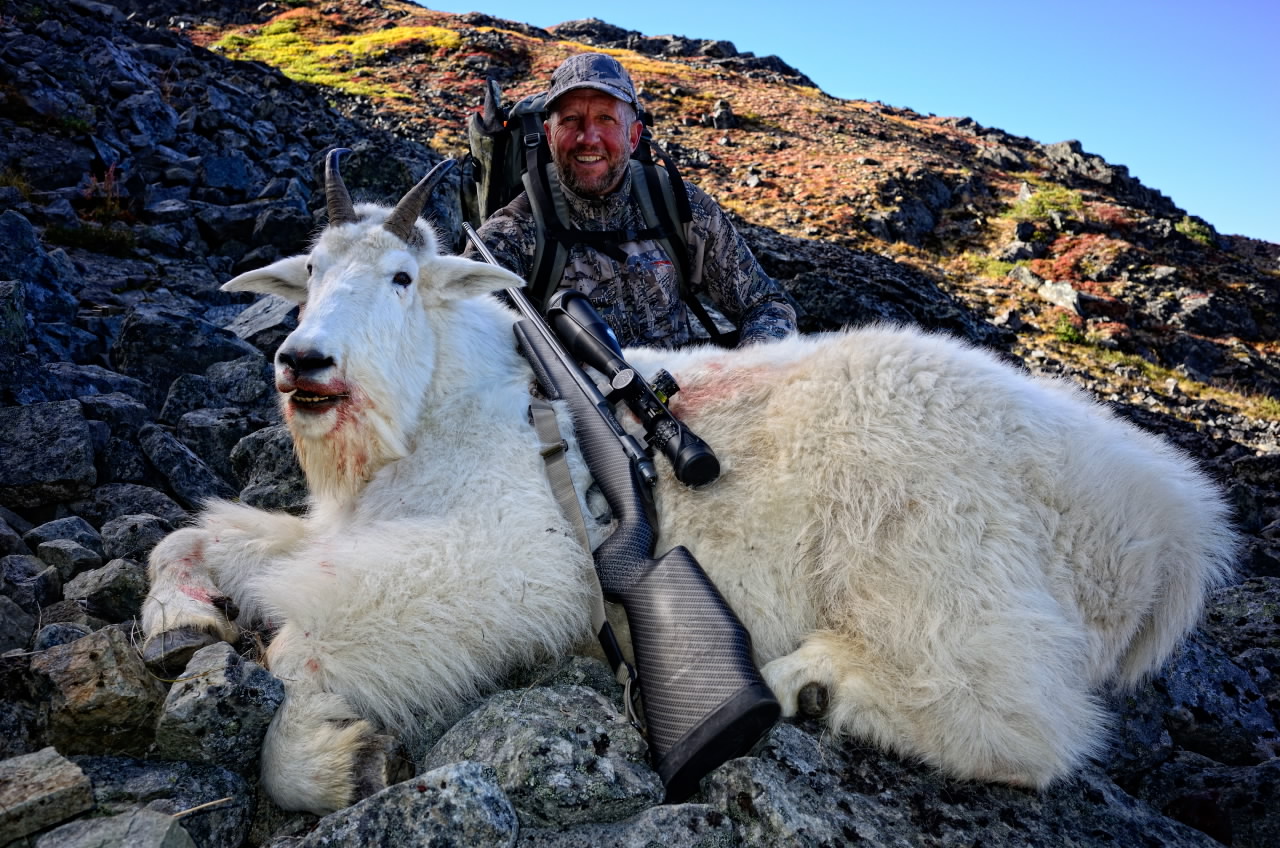 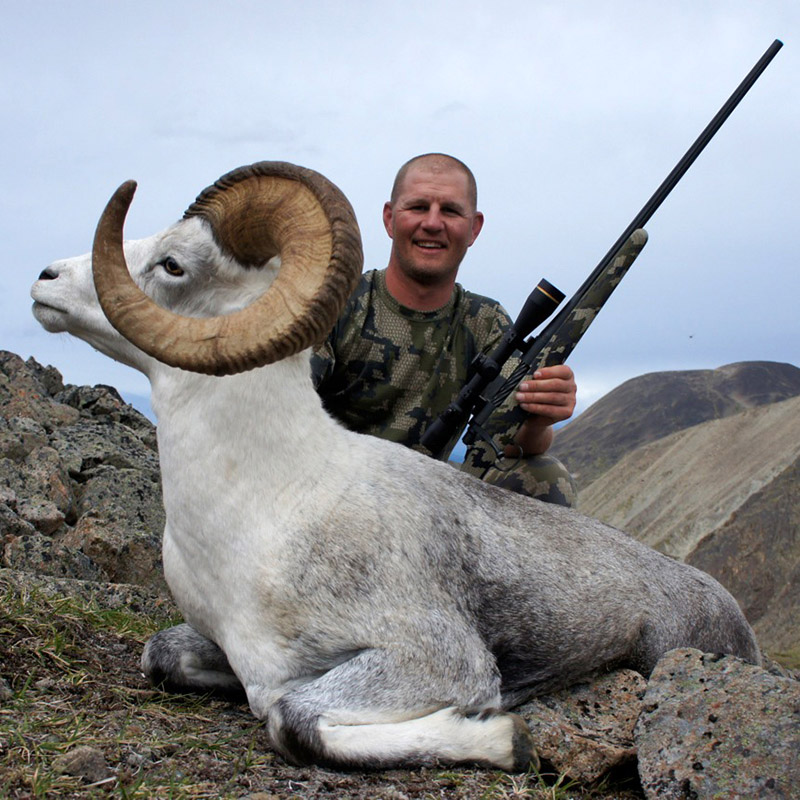 “Here are some pics of my 10-1/2-year-old stone ram I took with Jarrett Deuling at Deuling Stone Outfitters. It was a very tough backpack hunt; we hiked over 100 miles in 15 days of hunting. I killed my ram on the 10th day with one shot from 361 yards (steep angle, shot him for 300). My Red Rock Precision rifle is a dream to carry at only 6.4 pounds with 3 rounds in it. Also seen below are my last range shots at 4-5-600 yards during practice. I shot each off a pack just like hunting situation. Honestly, the gun shoots way better than I can shoot it.

I talked to a lot of gun makers when I was looking for the right rifle to take on this hunt. Everyone makes a 9-1/2 to 12-pound 1000-yard gun. They are basically all the same – big scope, long barrel and heavy. I’m sure they are great for long-range shooting, but it is not that practical for a backpack sheep hunt like mine was. I am not a long-range shooter. I’m a backpack sheep hunter. A rifle is a paperweight until I need it. An extra 4 pounds of food or a good spotting scope does me more good over a 12-day hunt than a giant rifle. Our focus at KUIU is always cutting weight off our system clothing, pack, etc. To kill the curve with a big heavy rifle makes no sense.

Todd and I met at the Western Hunting and Conservation Expo in Salt Lake City. We were talking rifles, and he asked me what I was going to take on my Stone hunt. I told him didn’t know. Basically, I wanted a rifle as light as possible, yet still very accurate and shootable at practical distances (sub 500). Todd said he could build that rifle. My wish list was a 6-pound, 500-yard gun. I left the details in Red Rock’s hands. What I ended up with was a 6.4-pound 710-yard gun (710 is the max range on my turret).

Todd and Curt did an awesome job on the rifle, the ammo and, most importantly, the information to help me shoot it well. When it came time to kill the ram, there was no doubt in my mind he was not leaving that basin except in my pack. I’ve never been so confident making a difficult shot.

Let’s Start Something
TOGETHER!

Do you have questions before you are ready to build your custom gun? Let us know!